Eric and Kelly are the owners of Alberta Dancesport – Calgary's best place to dance, the directors of Salsa Rica Productions, and the organizers of the Calgary International Salsa Congress, and the Edmonton Ballroom and Salsa Gala.
Eric and Kelly are proud to be choreographers on So You Think You Can Dance Canada, and to have been finalists at many World Professional Salsa Championships. Eric and Kelly perform and teach on the international salsa circut and judge many events including the Global Salsa Championships at the World Salsa Summit.

Kelly Lannan has been a featured choreographer on So You Think You Can Dance CANADA and has danced on the local tour stop of Dancing With The Stars.

Kelly is a judge of many international Salsa events including the Global Salsa Championships at the World Salsa Summit, and trains many dancers from the student to professional level.

Kelly is proud to be an owner of Alberta Dancesport, Salsa Rica Productions, the Calgary International Salsa Congress, and the Edmonton Ballroom and Salsa Gala.

She has been featured as Emcee at the Global Salsa Championships, Canadian Dancesport Championships, and many international Salsa and Dancesport events. Kelly is most proud to have the opportunity to represent her family, the dancers of Salsa Rica, and her hometown of Calgary.

Eric has represented Canada at many World Championships. Eric is a featured choreographer on So You Think You Can Dance CANADA, and was a featured dancer on the DANCING WITH THE STARS tour stop in Calgary. Eric is a former Open North American Ten-Dance Champion, and has traveled the world competing at some of the world’s most prestigious dance events including the Ohio Star Ball and the Blackpool Dance Festival. Eric coaches many of Alberta's top professional and amateur couples including some national and World Champions. Eric is the co-director of Salsa Rica Dance Company, the co-producer of the Calgary International Salsa Congress, and is a certified International Standard (Ballroom) and Latin adjudicator.

Eric began his dance training at the age of six in Montreal, and received training in the Latin and Ballroom dances from some of the world's top instructors and coaches. He moved to Calgary in 2000 to pursue a very successful professional ballroom career, and here he was introduced to Salsa in the clubs. Eric quickly fell in love with salsa because of its free and fun social style. 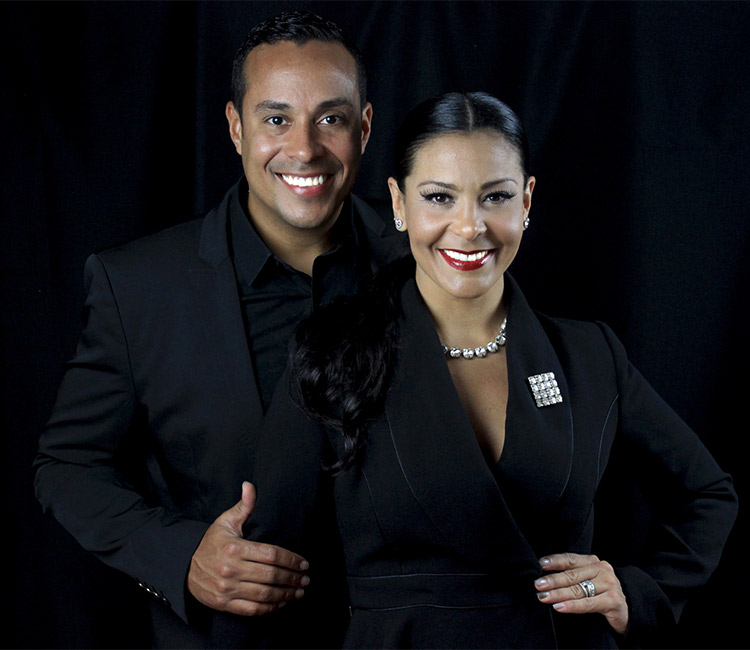 Tito and Tamara are internationally known salsa dancers from Puerto Rico who have performed in over 75 cities around the world. Both Tito and Tamara began dancing at a young age, and have over 20 years of salsa dancing experience. They are also skilled at other dance forms such as jazz, ballet, hip hop and more.

Emily Alabi (pronounced AH-LAH-BEE) has a profound passion for the arts and entertainment.

Her recent credits include a recurring role on "Marvel's Runaways," a supporting lead in Lifetime's "The Christmas Edition," and a supporting role in an upcoming holiday romantic comedy starring Haylie Duff.

Her additional credits include a 'Top of Show' Guest Star on CBS's "NCIS" and a recurring role on MTV's "Teen Wolf."

With 8 championship titles under her belt, Emily is an award-winning salsa dancer and known throughout the world as part of the dynamic brother and sister duo, 'Junior and Emily.' You may have seen their work on "America's Got Talent," "So You Think You Can Dance," "Dancing with the Stars," Disney's "Austin and Ally," and CW's "Jane the Virgin," which has earned them both global and national recognition. In addition to being a decorated salsa dancer, Emily is also an accomplished choreographer. Her most recent work can be seen on Netflix's "Selena: The Series."

A woman with a strong work ethic and palpable passion for her art, Emily has dedicated her life to inspiring and motivating the people around her. She has partnered with several non-profit organizations and has given advisory speeches to new generations following in her footsteps.

Emily is managed by Michelle Zeitlin, More Zap Productions & Management; represented by Ro Diamond and Steven Jang and team at SDB Partners for Theatrical; Bloc Agency for dance and choreography; and Marta Parrillo and team at Daniel Hoff Agency for commercial on-camera.

Junior Alabi (pronounced AH-LAH-BEE) has a profound passion for the arts and entertainment.

With 8 championship titles under his belt, Junior is an award-winning salsa dancer and known throughout the world as part of the dynamic brother and sister duo, 'Junior and Emily.' You may have seen their work on "America's Got Talent," "So You Think You Can Dance," "Dancing with the Stars," Disney's "Austin and Ally," and CW's "Jane the Virgin," which has earned them both global and national recognition. In addition to being a decorated salsa dancer, Junior is also an accomplished choreographer. His most recent work can be seen on Univision's hit show "Mira Quien Baila," as well as an upcoming commercial with renowned director, Raul B. Fernandez.

A strong work ethic and palpable passion for his art, Junior has dedicated his life to inspiring and motivating the people around him. He has partnered with several non-profit organizations and given coaching and advisory speeches to new generations following in his footsteps.

Karel Flores was born and raised in Mexico City, Mexico into a family of artists. From very young, Karel was exposed to both acting and dancing, from participating in every dance group in school to taking on main roles in Mexican soap operas.

Throughout the years, she took up acting, jazz, Hawaiian dancing and cheerleading, but these were only extracurricular activities and she never imagined actually making a career out of dance nor acting. It wasn't until high school that she discovered the dance that would change her life, salsa. Being an overachiever, Karel moved cities to be able to train with the best dance company in Mexico “salsa con clave” directed by the world-known Víctor and Gaby. However her hunger to learn didn’t stop there.

After about 6 months, she decided to spend a few months in NYC to try to learn as much as she could. However, those few months turned into 10 years, when during her stay in NYC she was invited to join her dream dance company, Yamuleé.

Training directly under Osmar’s direction she was able to consistently alternate with his permanent dance partner. Not long after an opportunity arose when Osmar’s former partner decided to take a break from dance. With not a moment of hesitation, Karel embraced the opportunity and shortly after, she became Osmar Perrones’ official dancer partner.

Years of training and hard work has allowed Karel to become a world wide known top dancer and instructor. With Yamulee dance co., as the director’s former partner and female lead dancer, and now, both as a solo artist, instructor and choreographer, Karel has traveled and conquered hearts and stages from North to South America, Europe and Asia.

Tatiana Bonaguro was born in Milan on March 5, 1988. At the age of 13, having practiced a variety of sports, she discovered the Caribbean dancing world. She studied under the tutelage of Fernando Sosa and practiced with the Tropical Gem team. Her first instructors were masters such as: Fernando Sosa, Rafael González, Alyra Lennox, and Sandy Ramos, who guided her first steps, and directed her through the profession. After years of studies and training, in March 2003, she debuted as a professional dancer with the world-famous Tropical Gem Dance Company.

With this group, during the last almost twenty years, she has participated in the most important world congresses. Moreover, for three consecutive years, has arrived in first place in the prestigious Las Vegas Ultimate Championship, competing in the Mega Team category.

Tatiana has participated in three theatrical productions under the guidance of Fernando Sosa and Marco Berreta: “Fantasia”, “Homenaje a Celia”, and “Tropical Gem History”.

After numerous television appearances, she has recently performed as a supporting actress and dancer in the film "The Latin Dream", conceived, produced and choreographed by Fernando Sosa, and directed by Louis Medina, released in theaters in June 2016 and currently in the Prime Video platform

A Caribbean dance teacher for more than fifteen years, she has taught for twelve years at the Sosa Academy Dance School, one of the most successful Caribbean academies in the world. She is currently the female lead of Tropical Gem, along with her mentor, Fernando Sosa.

Luis García and Andrea Cobos, from Spain (Cádiz and Ibiza respectively), are one of the most captivating bachata couples today, recognized worldwide for their sensual bachata style. They have training in different disciplines of Latin rhythms (salsa, bachata, chacha, etc.), as well as flamenco (Luis) and sports gymnastics (Andrea), which have helped them develop their own style of sensual bachata, highlighting its technique, sensuality, fluidity and its continuous innovations that help develop the world of dance. They are specialists with a university career in teaching techniques and methodology.
It is in 2015 when they started their professional career together, participating as artists in dance congresses in Europe and Africa, the recognition of their dance is triggered when videos on social networks began to be seen throughout the rest of the world. In mid-2015, they began their Asian tour, creating choreographies and teaching their own dance style to teachers from all parts of the continent.
In 2016, they visited the United States for the first time, starting in San Francisco, making their way to cities like New York, Los Angeles, Las Vegas, Washington DC, Virginia, Orlando, Chicago, etc. It is at the end of this year when they collaborated with bachata artist Dani J on his theme "Amor Eterno" being the main dancers of his video. Since then the media impact on which it generated has continued to grow, having more than 260,000 followers on Facebook, 110,000 on Instagram, and more than 15 million views on their YouTube videos. At the end of 2017, after touring through South and Central America, they decided to be part of an online dance school (dancesurfing.com), with students from all corners of the planet who receive their training and teach their style in their respective countries.​ They currently have their own dance companies called Luis and Andrea Bachata Team in 12 different cities in Europe, Asia, and America. These companies represent their choreographies in dance congresses in their respective countries. They have been judges in a multitude of international bachata competitions and thrilled to be on the panel for the Ultimate Latin Dance Championship.